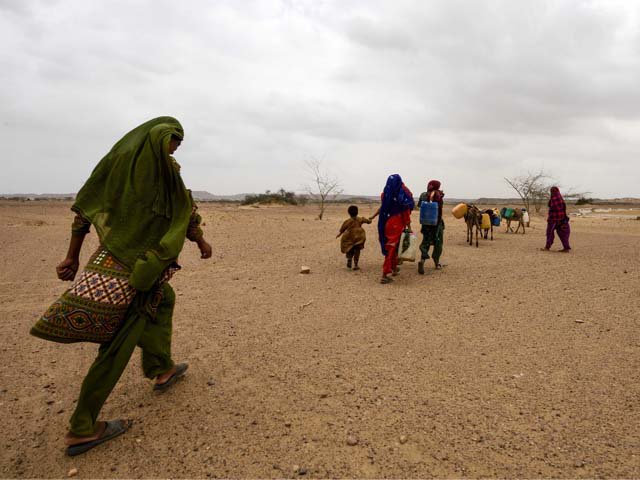 Hazoora, a 24-year-old native of Kohistan (an arid piece of land located near Thatta), complains that her hair is falling due to transporting heavy cans of water on her head since she was eight-years-old.

She travels approximately one to eight kilometres every day to fetch her share of water, and her body aches from carrying six to seven buckets of water daily for domestic needs. Even her pregnancy did not put an end to her ordeal since water is not a commodity one can live without.

This is not just Hazoora’s plight, but the plight of thousands of women living in this dry and barren land where fetching water for domestic needs is seen as the responsibility of women only.

Even most of the young girls are made to fetch water for their households, leaving them with no time to study or play since this is a daily obligation. As a result of this life-long responsibility, women develop bone deformity and other complications. This is not difficult to believe in light of the fact that they regularly lift 10 to 15 litres of water from the depth of approximately 40 feet.

Local men are unfortunately not of any assistance, despite this being a tough job, as they consider it “unmanly” to perform such chores. The village elders, when asked about this odd custom, seem to be unaware regarding the origination of this cruel custom. But they are proudly carrying it forward nonetheless, without any thought of how this may affect the well-being of their women.

Fetching water is a complicated task, but a greater complication is that water cannot be fetched where it is not available.

Living in Karachi, it is easy to picture gallons of water being wasted on long baths/showers and washing vehicles or dishes without realising that just a small distance away from the city, every single drop of water is considered a necessity in order to survive. Kohistan, in particular, is incredibly stressed for water. Its people are almost entirely dependent on rain for water-based needs.

Providing water to the people of Pakistan is the responsibility of the government, but unfortunately, ours has failed miserably in that area. Mohammad Yousuf, a local man, revealed that politicians who won seats from this constituency only visit the area during election time or to offer condolences for the death of a community elder, but they never bother to take interest in the troubles of their voters.

It is this indifference and incapability of local representatives towards their people which creates a vacuum that is subsequently filled by NGOs. Where the institutions fail, it is the private sector that steps up and organises public campaigns to help drought-affected areas in Sindh. One such initiative is the ‘Water for Women project’, a collaborative project between Indus Earth Trust, an NGO, and the Coca-Cola foundation. This will ultimately benefit 34-40 villages, as not only will wells be improved, allowing for easier water extraction, but the extracted water will be collected in covered tanks and later distributed through channels for household use, and through troughs for livestock.

Tayaba, an NGO operating in Tharparkar, came up with the idea for an H20 wheel, with the aim to provide one barrel per household and then provide them with access to clean water. The H2o wheel helps the women transport water easily, as they just have to drag the barrel back and forth instead of carrying it on their heads or back. Such projects will eventually bring about a marked improvement to the lives of the struggling locals, particularly the women who bear the brunt of water scarcity.

Kohistan remains one of the many marginalised communities in Pakistan where poverty is rampant and governance is absent. The suffering of the people as they struggle to find water is so gut-wrenching that a brief visit of this area will haunt you for days.

The presence of NGOs only serves to highlight that it is not impossible to invest in such drought-affected areas and help its people; it is simply negligence on the part of our leaders and government. Hopefully, one day, the Sindh government will wake up and take action for a change, and hopefully that day won’t be too far for the people of Kohistan.