As an educationist and climate activist for the last two years, I have created awareness and advocacy campaigns regarding environmental protection and climate education among youth. We need environmentally and socially responsible people to address the climate crisis to save our next generations from this disaster.

Recently, a very drastic incident happened, motivating me to research and write on this topic. I was coming late from a conference in the night when suddenly Smog covered all my surroundings with zero visibility. I was all alone; it was all dark. I could not see and lost my way to my home.

My heart started beating fast, and I felt so anxious and stressed that I could not think further. Luckily, somehow, I managed to reach home safely. I wondered whether the extreme weather incidents have any mental and psychological consequences. So, I started asking my friends around me. To my surprise, the climate crisis somehow affected their mental wellbeing. 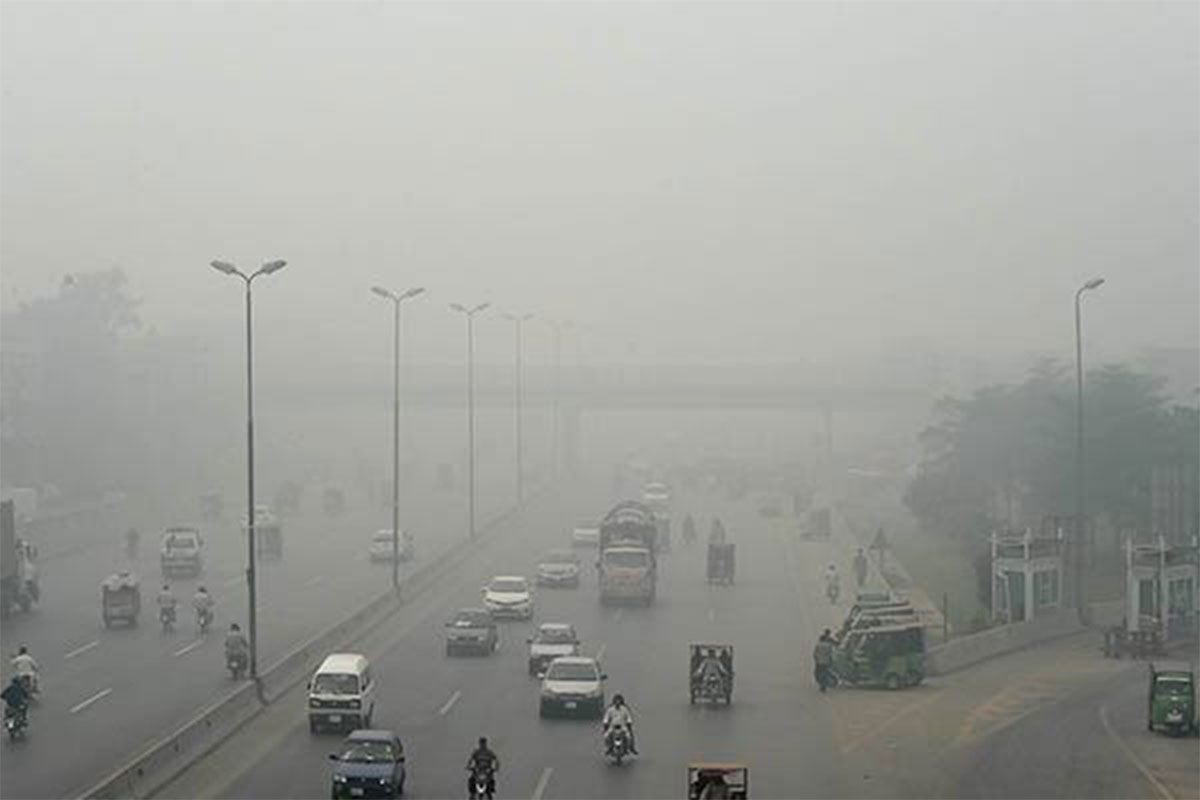 ( The city surrounded by the thick layer of Smog)

One of my friends aggressively added that living in urban cities in the 21st century is an environmental disaster and a global threat to the climate crisis. Unfortunately, now all developed and developing countries are facing this. He further added that urbanization is often directly linked to the degradation of environmental quality, including water, air, and noise. Together, the negative impacts of climate change and urbanization pose significant challenges, especially in developing countries where resources to mitigate these impacts are limited. Then I realized that our country is also the fifth most vulnerable country to climate change while analyzing the 20 years between 2001  and 2021. Pakistan witnessed 152 extreme weather events in this period, causing total losses of $3,792.52 million.

Almost 50% of Pakistan’s population is generally vulnerable to the climate crisis. The last decade has been the worst period for Pakistan in natural disasters like floods, drought, declining rains, heat waves, melting glaciers, rise in temperatures. In the coming years, water availability for hydropower generation may decrease. The increase in the summer temperature tends to increase the use of air conditioners, resulting in more carbon emissions. The climate disaster-related deaths also increased. Even the Global Alliance on Health and Pollution indicated that 128,000 Pakistanis die annually in 2019 due to air pollution-related illnesses. Urban drainage systems may overflow by high rainfall and flash floods. Over the years, these disasters have destroyed or damaged hospitals, schools, infrastructure, and livelihood.

Lahore is one of the major cities of Pakistan, having a population of more than 12 million. The people from golden ara considered it a “City of Gardens.” But, now, it is known as the city of trash and drains. Recently, Lahore has ranked as the worst in having the most polluted air in the world. We have all kinds of problems resulting in environmental degradation like Smog, traffic jams, urban flooding, shortage of clean drinking water, humps of trash on streets and roads, noise pollution, vehicular emissions, industrial pollution, fossil fuel-fired power plants, the burning of waste materials, and coal burned by thousands of brick kilns. 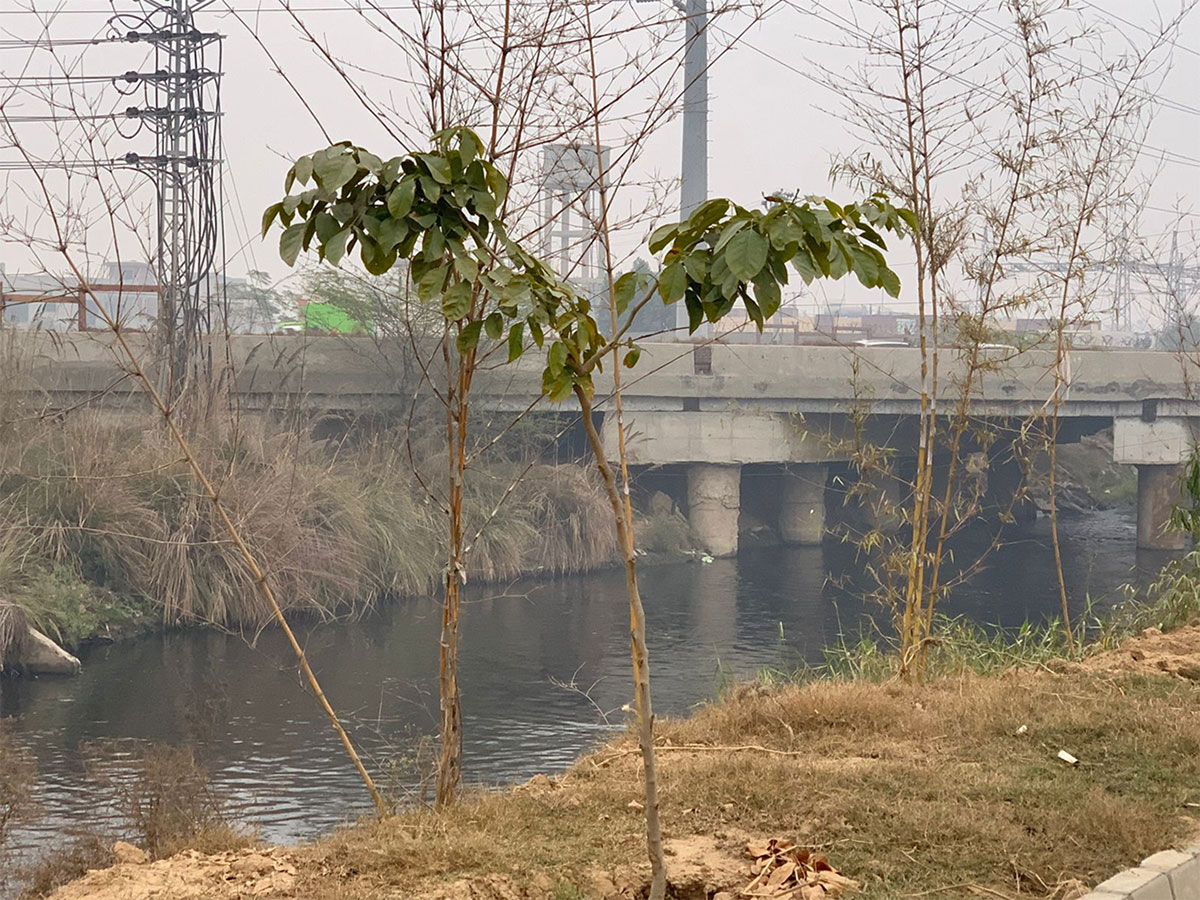 ( A open drain on the main road in Lahore)

Today, everyone lives vulnerable and risky lives, especially women, kids, and elders who are more prone to climate disasters. The mental and psychological may impact the individuals and groups in many ways, directly affected by extreme weather, or indirectly or having threats for unnecessary risks in future and psycho-social when the community is collectively facing the hazard of heat, drought migrations, climate-related conflicts.

People who experience any climate-related disaster may develop the symptoms of stress, short-term anxiety, and psychiatric disorders. The warning sign of posttraumatic stress disorder includes flashbacks of the event, increased arousal, and avoidance of cues to the memory of the event. In many cases, the symptoms of PTSD may have delayed inception, months to years after experiencing a threatening disaster situation. Other stress-related disorders include developing acute and transient psychosis and relapse of bipolar disorder. The fear of losing home and loved ones in individuals made them gloomy, disheartened, and low-spirited.

A male resident in Samanabad living near a drain for several years said they live their lives with the stench of the polluted water. It made him extremely sad and left out as many people refused to visit his home. He said he felt frustrated to have been born in this area and showed despair and agony towards a sustainable future. 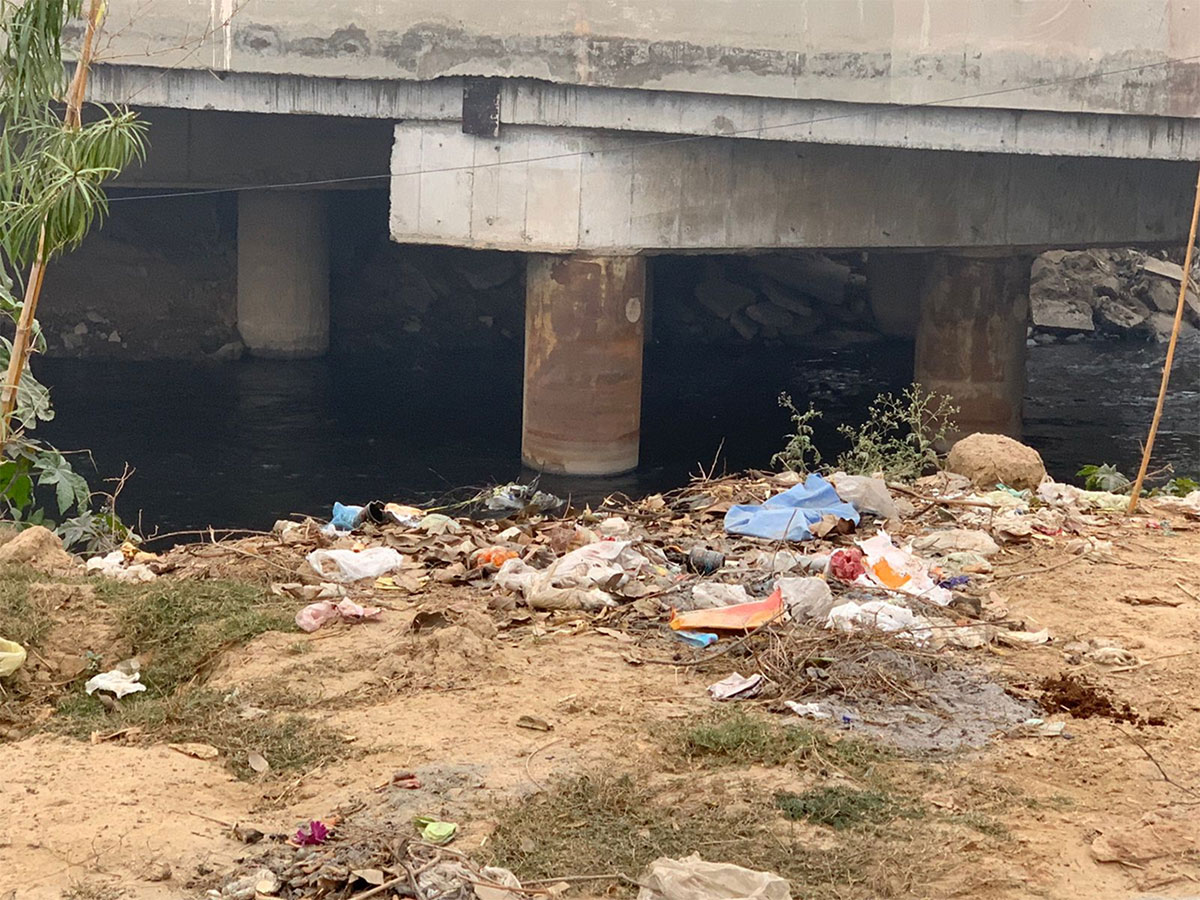 ( Heaps of trash along with the open-drain)

Another resident from the old city of Lahore also said that we have been living in the dark ages for decades due to a lack of infrastructure, tiny houses, and open sewerage lines. The government is incapable of solving our issues. He also added that many people hurt our sentiments by tagging us as residents of the most stinky and dirtiest streets of Lahore. It also shattered his self-confidence/esteem, and he always blamed himself for being a resident of this city.

A male living in a dumping site of trash near Johar town narrated that he felt frustration and anguish due to the incompetence of local government, that his area has been turned into “Kachra Kundi,” damaging the beauty and aesthetics of the city. It is very heart-wrenching when people start criticizing their financial and social status because of the place we live. When people tag their houses with stinky, dirty, and degrading remarks, it creates emotional instability. Each morning brings great despair in his life instead of hope or positivity as this plastic pollution is becoming a mess and unattended problem.

A resident of the northern mountains shifted recently to Lahore for a job. He said that it was his worst decision to be part of an urban city. Initially, he could not settle down with the fast-paced metropolitan life and faced severe anxiety attacks and short-term depression. He also becomes short-tempered, judgemental, and aggressive while facing noise, water, plastic, and air pollution. He also felt sad, lonely and thought negatively about everything around him.

I enquired from a girl living in the posh area of Lahore. She also said she had developed scary hallucinations while sleeping due to the noise pollution and massive construction of her neighborhood houses. 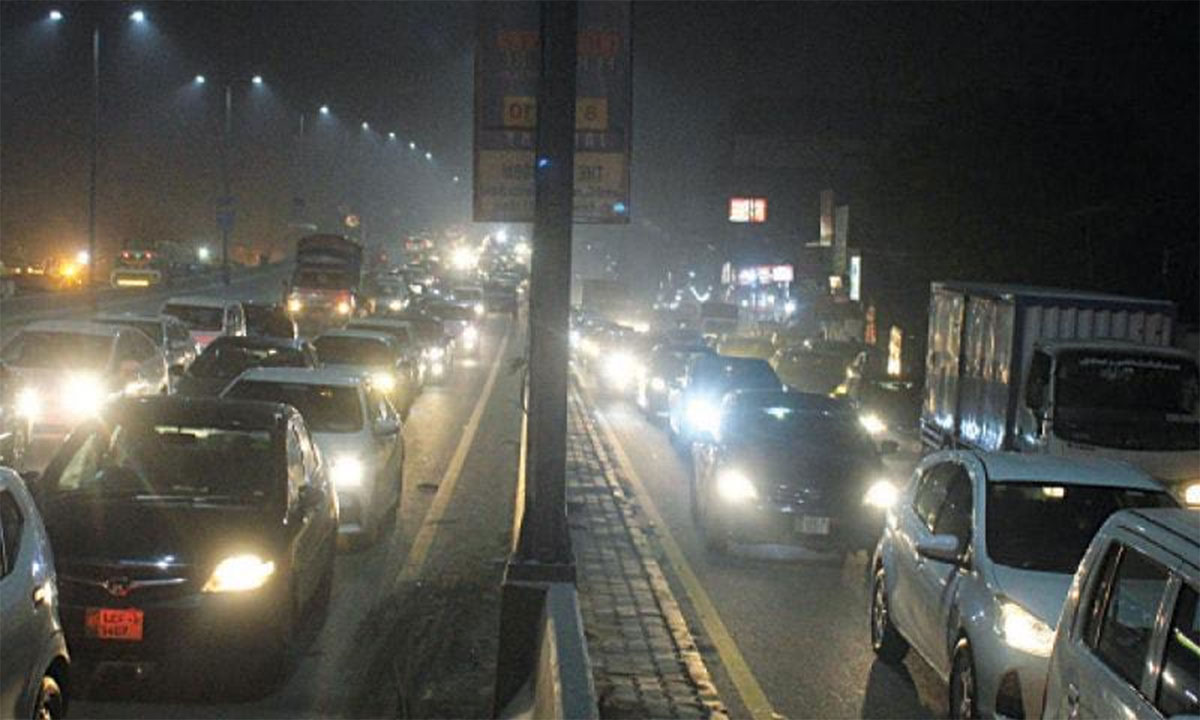 Another incident of mental stress was shared by a girl who needed to drive for one hour daily towards her office. Most of the time, she cannot decide which way to go or how to drive with shaking hands and a fast heartbeat while being stuck in a long queue of cars. So, traffic jams and noise pollution affected her peace of mind, decision making power, and intuition. 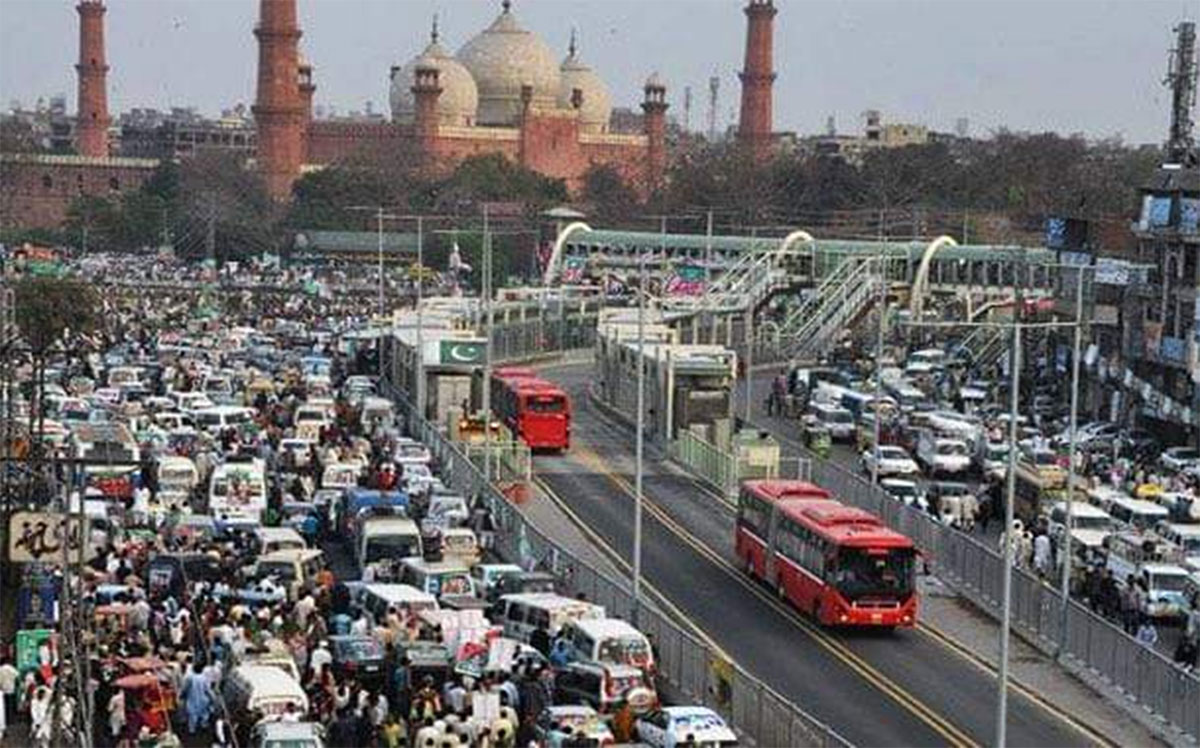 ( A long queue of vehicles near Badshahi Mosque)

The psychologist endorsed all the above experiences shared by the people. She empathized that climate change can cause and intensify stress and anxiety, adversely affecting mental health. She said people face many types of psychological like dementia or seasonal affective disorder due to lack of sunlight, and the different climate risks may result in personality development disorder. She added that noise pollution results in a lack of sleep and migraines and people may lose their sense of decision-making and conflict resolution. She also observed people are prone to anxiety, depression, and stress in winters due to fog, long nights, and dry cold.

To conclude, we need to immediately address the mental health and psychological consequences of the Climate crisis. The research experts and psychologists can develop advocacy campaigns with political leaders, government, and civil organizations to recognize its causes and solutions to tackle this. The advocacy campaign may become part of the initiatives to improve public health.

The Ministry of Climate Change should allocate funds for research in this field to advise the methods of individual and collective resilience among communities for better mental health and psychological wellbeing. The educational sector may also come forward in educating the masses about it. We need more health and psychological experts to understand the strong linkage between climate change and health. Data show that climate and health-related arguments are the most potent and directly felt by all components of society and the most likely to motivate more positive actions to reduce temperatures and atmospheric carbon levels.